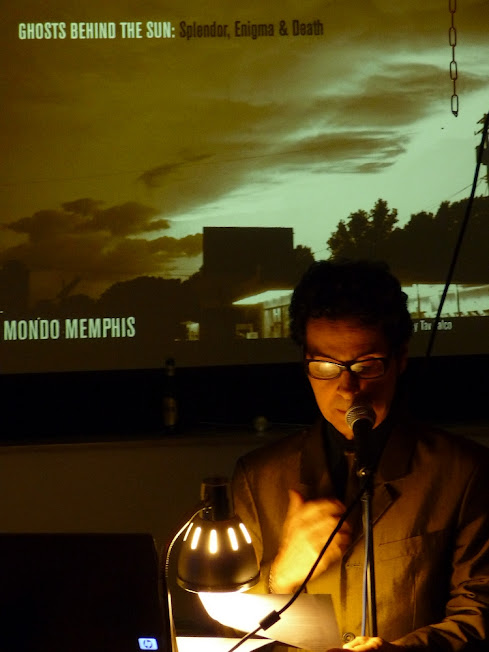 "Up river from New Orleans, past the ports of Natchez and Vicksburg,

looms Memphis -metropolis of the Midsouth and city of murder, necrolatry and blues. Memphis’s muse hangs in the air like crows circling in menacing descent with sardonic eye winking at the taildraggers below..."

MONDO MEMPHIS is a dual, 450-page encyclopedic history and psychogeography of the city of Memphis, written by performer Tav Falco and cultural critic Erik Morse. MONDO MEMPHIS is both an original history of the gothic South and an intertext of the urban legends, rural fables and literary clichés that have made the Bluff City simultaneously a metropolis of dreams and a necropolis of terrors.

MONDO MEMPHIS is a major work on American history and culture.

PART ONE: GHOSTS BEHIND THE SUN: Splendor, Enigma, and Death.

Tav Falco's sprawling study of Memphis begins with the Civil War massacre at Fort Pillow, the Yellow Fever epidemic of 1878 and the grisly murders of the Harp Brothers. Falco traces these legends of Reconstruction-era Memphis to an equally brutal twentieth century underworld – Beale Street kingpin Jim Canaan, Edward Crump's political machine, the Dixie Mafia, and others. Also included are revelatory dialogues concerning the city’s many music legends, from rockabilly icons Elvis Presley, Jerry Lee Lewis and Charlie Feathers to more underground figures such as Jim Dickinson and country blues wailer Jessie Mae Hemphill. Interwoven with these accounts is an autobiographical history of Falco’s own time in Memphis, including his involvement with performance art ensemble Insect Trust, working with pop/rock maverick Alex Chilton, and the formation of his seminal rock and roll band, Panther Burns. With over 80 illuminating photographs, mostly previously unseen originals by Falco, and many printed in duotone or colour. 300 pages, illustrated throughout.

TAV FALCO is an American-born musician/performer, film-maker, and photographer. He has led the psychedelic rock-and-roll group Panther Burns since 1979. Memphis has long been Falco’s adopted home town and spiritual sanctuary.

PART TWO: BLUFF CITY UNDERGROUND
Erik Morse's vertiginous noir novella follows West Coast graduate student Everly Loennrot as he lands at the city's luxurious Peabody Hotel for a mysterious research assignment. Guided by the invisible hand of Dr. Red McGill, professor of Southern history, Loennrot wanders through a postmodern Memphis of plasticine landmarks and leopard-skin tourist traps. There he encounters a troop of eccentric characters – an Elvis conspiracist, a rock musician cum alchemist and a rockabilly femme fatale who might be a prostitute, hired gun or ghost. When a midnight rendezvous at a highway motel turns deadly, Everly enters a vortex of double crosses, double meanings and murder, all of which point to a centuries’ old secret society known only as the Memphis. Struggling to decipher the rebus slowly enveloping him, Everly is faced with a terrifying question – is the Memphi a blood-thirsty criminal syndicate or simply an elaborate hoax? 160 pages, with chapter illustrations.

ERIK MORSE is a renowned American underground author, rock writer and journalist. He is a contributing writer for Frieze, The Believer, Bookforum and Modern Painters, and the author of “Dreamweapon – Spacemen 3 and the Birth of Spiritualized” (2004).

"A wonderfully dense, ceaselessly entertaining trawl through the history of Memphis' cultural underground and criminal demimonde. A book populated by hipsters, grifters and dreamers, that vividly brings every moment of magic, inspiration and madness to life."
– Bob Mehr, music critic Memphis Commercial Appeal

"These books put the 'psycho' back in 'psychogeography', and history seldom gets this personal."
–Luc Sante, author

"Mondo Memphis, the singular hybrid that is Morse & Falco's roman noir/history of Memphis, steeps the reader in the most occult nectars of a place, a city evoked in line after tumescent line of haunted prose. Southern gothic ghosts scramble across each rippling page in mad dashes, hurtling across corrugations of text swollen with the satiety of its subject's past, redolent corrugations tilled up out of a soil engorged with lust, madness, music and febrile civic histories. Plunge into this wealthy and eccentric masterpiece and dissolve yourself for delicious eternities in mythic Memphis."
–Guy Maddin, film director